London trader accused of causing 2010 crash fights extradition to US

London trader accused of causing 2010 crash fights extradition to US 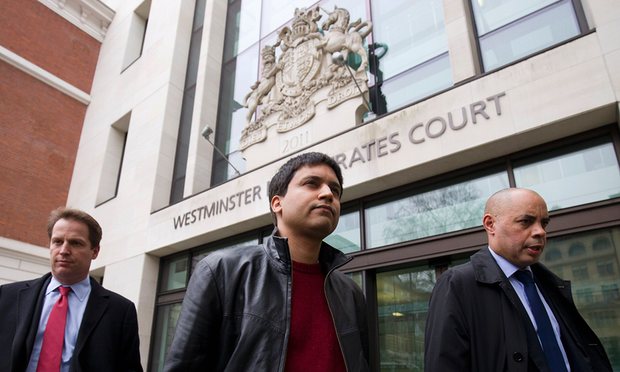 Navinder Singh Sarao, wanted in US over multibillion-dollar Wall  Street crash, takes appeal against his extradition to high court

A British financial trader accused of helping trigger a multibillion-dollar Wall Street crash from a suburban UK home is mounting a high court challenge against a decision that he can be extradited to the US to stand trial.

Navinder Singh Sarao, 37, nicknamed the Hound of Hounslow, is wanted in America over allegations that he helped cause the 2010 Wall Street “flash crash” from his parents’ home 3,500 miles away in Hounslow, west London.

He faces 22 charges, which carry sentences totalling a maximum of 380 years, over claims that he contributed to the Dow Jones Industrial Average plunging 600 points in five minutes, wiping tens of billions of pounds off the value of US shares.

At an extradition hearing at Westminster magistrates court in March, the district judge, Quentin Purdy, ruled that Sarao could be sent to stand trial in the US.

Lawyers for the former bank worker and Brunel University student argue that his actions did not constitute a crime.

In his ruling, Purdy said: “The causes of the flash crash are not a single action and cannot on any view be laid wholly or mostly at Navinder Sarao’s door, although he was active on the day. In any event this is only a single trading day in over 400 relied upon by the prosecution.

“Essentially, has the US established that the same actions in this jurisdiction at the same time would be capable of being prosecuted for one or more offences known to the criminal law? This is not the forum for testing the evidence as in a trial. To my mind, when all is said and done, the US are correct in arguing they have shown dual criminality.”

Sarao, who is on bail, will have his challenge heard by Lord Justice Gross and Mr Justice Nicol at a hearing in London.

More in this category: The first batch of export oil shipped in Kashagan »
back to top
FaLang translation system by Faboba